Of Coffee and Mustard Yellow. 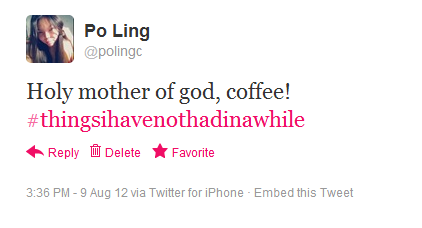 So as you would have came across (if you follow me on twitter you would. if you aren't, i dunno why are u even on twitter.) [kidding] [no, really. im serious], yesterday i tweeted about coffee and the hashtag is pretty much self-explanatory. Then not long after that tweet, i went and have myself a cuppa. it was kinda like heaven UNTIL when i'm suppose to sleep. I think i drank it at around late evening round 5-ish cos i remembered watching a drama of that supposed timeslot.

but anyways to cut long story short. i couldn't sleep last night. i must have drank it too late in the day and the caffeine was working overtime. i went to bed after watching 강심장 which was already round 2.30am. i literally was tossing and turning in bed for hours. i even tried reading a book, scroll thru tumblr, meditate, whatever. after all that, i only managed to fall asleep at 6am!

Despite falling asleep at that time, i had a mani+pedi appt to go to at noon. This is my latest nail-do.

Didn't take a picture of my toes but my colour choice this time is 'Suzi Loves Cowboys' by OPI.

Feeling like a zombie right now, it's not even funny. feeling kinda hungry too. im putting effort in sleeping early. wish me luck. will probably lay off from coffee in awhile and get energy from other healthier source.